Well reality hit the night we boarded a large dive boat, the Pacific Star, at 8pm on October 7th.  My lead swimmer crew (Sylvia Lacock) and I met the rest of the crew---two captains, 2 deckhands/galley cook, two observers, and  two kayakers.  Wow…this was a quite a crowd to help support my crossing.  Yes, it was a little intimidating to have so many people on board and very different from my English Channel Crossings in 1985/1986 where we had one captain, one deckhand, one observer and one lead swimmer  crew and a very small fishing boat!

After the mandatory safety briefing by one of the deckhands, and then being read the Catalina Channel Swimming Federation (CCSF) rules for the swim which must be followed closely to have the swim ratified, we were underway at 9 pm.   The ride out from the Mainland to Catalina is about 2 hours and 15 minutes.   I stayed outside and laid down on the deck and listened to music as I was gently rocked back and forth by the boat and felt the diesel engines vibrations which was like a mini massage.

We landed about 25 yards off Doctor’s Cove on Catalina and the kayaks had to attach their light sticks to their kayaks so they would be visible to the boat and myself.  I also had to put on blinkie lights that I attached to my goggles and swimsuit as well as some ‘goop’ to keep me from chafing. Dan (one of my kayakers) informed me that this was a special crossing for him as it was his 200th…so there was even more reason to make the swim a success!!  Additionally, Dan mentioned to me that there was another swimmer that had just left about 20 minutes ahead of my expected jump time. Dan and I worked together this summer and he knows my competitive spirit and I smiled a little bit and he knew exactly what I was thinking…”Catch the swimmer.”  It is just wonderful to have another swimmer in the water at the same time because you know there is someone else who is also out there swimming---some camaraderie.  I was ready.    There was no hesitation when Dan told me it was ‘time’.  I stepped off the platform of the boat and followed Dan to shore to start the swim— very carefully as we had to navigate through rocks as it was low tide.   He had a flashlight attached to his head and it was shining on the water.  I was able to see some baby lobsters on the bottom.  I was excited to see them---come to find out later that this area is a crustacean sanctuary.   When my hand hit the shore I stood up, walked out of the water where there is no sea water beyond, raised my arms and as soon as I stepped into the water  and put my hands down, the swim began at approximately 11:30 pm.

Swimming at night and into the morning is one of my most favorite times to swim.  It is peaceful, serene, and the night sky is beautiful.  I still was a little tense in my stomach as it takes a great deal of concentration and focus at night to stay a set distance from the kayak…obviously not too far and not too close (you will get hit with a paddle).  I fed approximately every 30 minutes for no longer than 30 seconds but most of my feeds averaged about 15 seconds.  My feeds were mainly liquid with apple sauce and diced peaches as my mainstay with a little bit of vanilla almond butter.   It wasn’t until about 4.5 hours my stomach settled down and I found my tempo.  I could see the other  swimmer’s boat in front of me which kept my mind occupied most of the time during the night.  I did not feel, see or think about any sea life….my main thought was getting to the other side!!!  My stroke rate was steady at 68-69 at one point it did get down to 62 but as soon as the sun came up (which was gorgeous) it went right back up to 69.

The entire swim so far was uneventful which was exactly what I had visualized pre swim.    The water temperature was 67 degrees until the last three miles when it dropped about 8 degrees to 58 – 59 degrees due to upwelling.  I am fine with that temperature as that is what I am used to training in SF Bay—67 degrees was like a bathtub for me!  The conditions were bumpy to swelly the first 4.5 hours with just a little swell for the next 3 hours and flat as a pancake the last 2 hours 45 minutes. But…….I was making great time with a swim potentially under 10 hours (average time is 11 -13 hours). However, there was now a 1 knot current against me and this is something that I was well trained for swimming in SF Bay as it is not uncommon to encounter strange tides/currents and I just had to bear down and grind it out, keeping a good tempo and not getting discouraged.  I was going to finish and even though it was an ugly current I was lucky enough to have flat water (hear the reframe?)!   At one point I did get a little snarky and inquired as to how far we were from shore.  Now, sometimes crew does not like to give that information to swimmers because they can get discouraged.  He told me “Close”….and I replied to him, “Well that only counts in hand grenades and horseshoes,” (I know dumb but when you are swimming/talking at the same time because you are not stopping you sometimes say ridiculous things).  He relayed that to the boat, and I guess they had a laugh, but Dan would still not tell me, and he asked, how far I thought I was off the Mainland.  I looked up and told him, “Three miles.”  Permission was granted and I was told that it was exactly, three miles!  My response was,

“Well I have been swimming for too many years to not know this!”

I was finally close to the finish, but a fog bank came in for a brief half hour and then lifted as I came to shore. Dan carefully navigated me through the crab pots, and I saw the bottom and immediately put my feet down…I couldn’t wait!!!  At the same time a wave came from behind and I almost did a face plant, but caught myself (not graceful), eventually run/walking on shore to my husband Phil who was waiting for me with a giant sized hug.   Unofficial time (it must be ratified by the CCSF) was 10 hours 16 minutes and 30 seconds.

Now this swim is a culmination of something called the Triple Crown of Marathon Swimming which includes the English Channel,  Swim Around Manhattan and Catalina.  I have one of the longest careers in open water swimming and the time between the first English Channel crossing in 1985 and Catalina Crossing in 2019 is 34 years.  I do not keep track of this information, but others do as longevity in the sport is difficult since it can take a toll on your body.

There is nothing solo about a solo swim which is a common saying in marathon swimming.   I have received overwhelming support especially from my husband who puts up with the crazy hours of training and enjoy the encouragement and youthful exuberance from my Terrapin family.  Honestly, I was not sure if the swim was going to be successful, but I know that there was a plan and I enjoyed following the plan.  For me I take pleasure in taking calculated risks because if I knew what the result was going to be it would not be any fun!!! 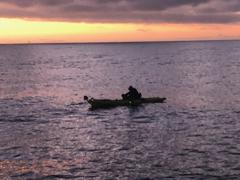 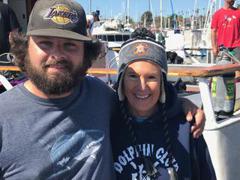 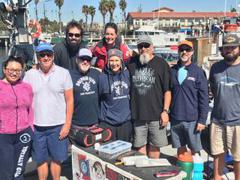 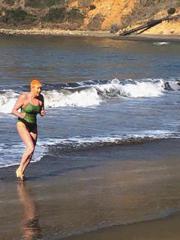 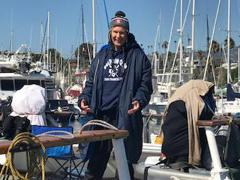